“When Lillie Zeng and Riley Smith met on Tinder in June 2016, they immediately bonded over a shared love of travel; she had just returned from Peru and Ecuador, and he had recently visited Vietnam. But when Riley suggested they meet for a drink, Lillie knew he was special. “He suggested we check out a new tiki bar with a shrine to Magnum, P.I.-era Tom Selleck’s moustache,” she tells us. “Sold!”

Nearly two years after they met, Lillie and Riley planned a trip to Costa Rica, where she prepared for a proposal. “Trust me when I say that I picked out numerous engagement-worthy outfits,” she says. “After scenic outings followed by adventurous outings followed by romantic dinners and no proposal, I figured, oh well.” But on the last day of their trip, Riley surprised her by getting down on one knee at brunch and popping the question—without a ring. “Apparently, it was still in production but he just couldn’t wait,” says Lillie. “I said, ‘No, do it again with the ring!'” When they got home and the ring arrived, Riley proposed again, and Lillie said yes. “It was sweet and intimate at home, but I still felt robbed of an epic engagement photo shoot, so on our next trip abroad—this time to Bali later that summer—he proposed to me over, and over, and over, again in scenic locations.”

When the couple began planning their nuptials, with the help of Ida Rose Events, their original engagement location became an immediate frontrunner. “Costa Rica is such a special place to us and we wanted to share that with our guests,” says Lillie. They chose Arenas Del Mar resort in Manuel Antonio, a spot they had visited on their previous trip, and invited 30 people to join them for a tropical-hued event on February 29, 2020. The couple honored the locale by including native flowers and fruits in their décor, offering traditional food and drinks throughout the day, and adding, says Lillie, “little touches that were entirely Costa Rican in nature, like Pura Vida signs and a traditional Costa Rican oxcart display.” But the moments unique to them became the ones they remembered the most: a tearful first look, their carefully-choreographed first dance, and their groomsmen donning pool floats on the dance floor. “We wanted an intimate and fun party with our nearest and dearest that celebrated all the things we love about Costa Rica and each other,” says Lillie. “Our reference point was Miami Vice and Magnum, P.I. meets The Great Gatsby on holiday.” – Martha Stewart Weddings 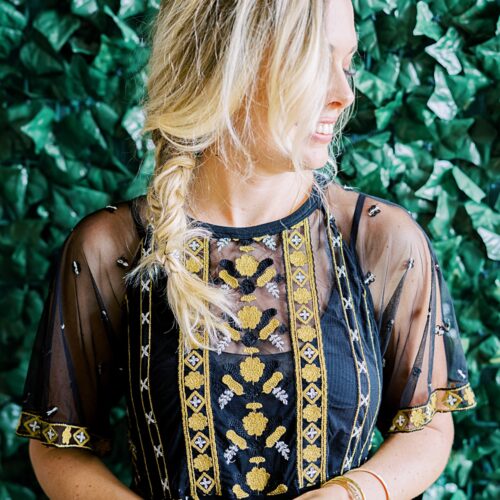 I love to work with couples that want to celebrate how they got here and to share that story as a gift with their loved ones in the ultimate kick-off to their marriage. That’s where custom invitations pull the whole story together.
meet the designer — 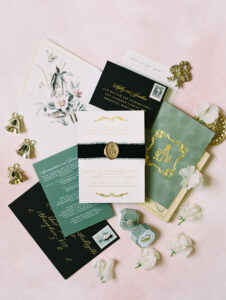 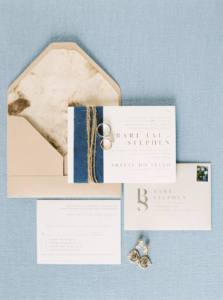 Best enjoyed with cappuccino while overlooking the harbor. Enter your email address below to join our list and receive weekly wedding tips, wedding inspiration and more!